Raksha Bandhan celebrations assumed a different hue this year as government functionaries including police officials vowed to ensure ‘Suraksha Bandhan’ or a safety net around children in Bal Mitra Grams (BMGs) in Koderma and Giridih districts of Jharkhand.

42 girls and 6 boys participated in the programme and briefed them about the Satyarthi Movement and BMGs and sought protection from exploitation as Raksha Bandhan gift. Promising to ensure a safety net around them, officials assured that protection and safety of children will be given supreme importance. Dhab SHO promised immediate legal action in any matter related to children, child marriage, child labour, child trafficking and vowed to protect children at all costs. 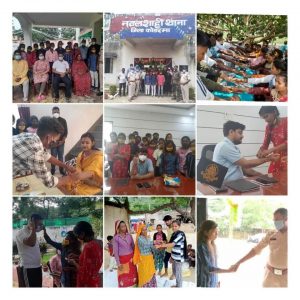 The celebrations at Jamdar Out Post in Giridih were led by Diana Award winner and National Bal Panchayat Vice President Champa Kumari and Tarapur Bal Panchayat Secretary Babita Kumari. They appealed for safety and protection of girls in the community while tying the rakhi to Jamdar OP in charge Lal Mohan Singh and other policemen. Nearly 35 children participated in the event.

“Children of Bal Panchayat have encouraged our team by tying the sacred thread of protection to us today. We will always give priority to the safety of our daughters. We will continue to support Kailash Satyarthi Children’s Foundation in the fight against child labour, child marriage and child trafficking,” Singh said.

Champa Kumari said the festival of Raksha Bandhan is being celebrated as Suraksha Bandhan Day across the country by KSCF. “We demand that every responsible citizen of the country should ensure their accountability towards the safety of daughters,” she said.

Mansadih OP in charge assured the children that they are always with them in their fight against child marriage, child trafficking, child labour and child abuse. “I would like to thank all the girls & KSCF team for providing such a memorable moment for us. This brother-sister relationship of ours will never be broken,” he said.