Kailash Satyarthi Children’s Foundation (KSCF) commemorating the International Day of the Girl Child on 11 October organised several events across the country through its flagship programmes in villages, the Bal Mitra Gram(BMG) or Child Friendly Villages programme. Below are some highlights of the celebrations from across the Indian States.

The BMG team in Rajasthan in association with its partner Bal Ashram Trust in Rajasthan distributed bicycles to 35 girls belonging to economically weaker families and ones who are doing well in academics. Following the cycle distribution, an arts and sports competition for the girls like Kabadi, Tug of War etc. was also organised to boost their confidence. Asmita Satyarthi, Trsutee of the Bal Ashram Trust addressed the audience and said that ” Daughters are nowhere less than anyone, they all should learn and get educated to be successful”.

The BMG team in Jharkhand organised “Girl Empowerment and Honor Ceremony” at Bal Mitra Gram Masnodih. Dr. Neera Yadav, MLA was the chief guest and Zilla Parishad member Shanti Priya also attended the event. Dr. Neera Yadav applauding the work of KSCF said “Sustained efforts of KSCF through its Bal Mitra Gram Programme has aresulted in reducing the child labour in Koderma district. Children’ access to education has lso improved as parents and children are showing interest towards learning. We need educated girls to construct a healthy society”  She further exhorted the children to move ahead, and achieve their life goals. 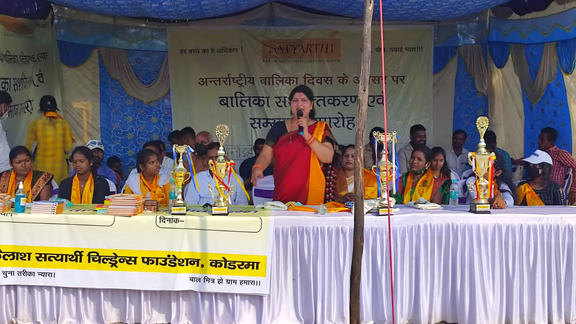 Following activities were also held as part of the celebration:

Kumari Divya, Child leader, Devpur BMG shared the achievement of Bal Panchayat  such as how it helped administration to foil 22 child marriages and the extensive awareness generation work carried  in the villages to sensitize the communities on the ill effect of child marriage.

Nikita Kumari, former president of Dhab Bal Panchayat and currently working with KSCF highlighted the role of Bal Mitra Gram program to ensure education and security of children.  Nikita said that through the Bal Mitra Gram program, more than 11000 children engaged in mica collection in Koderma-Giridih and ​​Nawada could be removed from child labour and linked to education.

The BMG team in Karnataka organised a bicycle distribution in Hangala panchayat on the eve of the International Girl Child Day.  Mr. Najappa, former Member of Legislative Assembly inaugurated the programme and Mr Kumaraswamy, the Gram Panchayat President also took part in the event.   In total, 15 bicycles were distributed to the selected girls who need support to continue their education.