In recognition of his “unwavering commitment to give voice to children around the world”, United Nations Secretary General António Guterres has appointed Nobel Peace Laureate & KSCF Founder Kailash Satyarthi as Sustainable Development Goals Advocate for 2021-2023. The role is integral for raising global awareness of the Sustainable Development Goals (SDGs) and the need for accelerated action.

Kailash Satyarthi’s appointment comes in the backdrop of the International Year for the Elimination of Child Labour being observed this year. Incidentally, the world saw a rise in cases of child labour for the first time in two decades this year with 160 million children now in child labour. The SDGs, adopted by world leaders in 2015, include a renewed global commitment to ending child labour. Specifically, target 8.7 of the SDGs calls on the global community to: “Take immediate and effective measures to eradicate forced labour, end modern slavery and human trafficking and secure the prohibition and elimination of the worst forms of child labour, including recruitment and use of child soldiers, and by 2025 end child labour in all its forms.”

Satyarthi’s appointment acknowledges the leadership and moral authority he brings in with his four decades of work building a global movement to advance children’s rights, eliminate child labour and slavery. It is also recognition of the central role that elimination of child labour, slavery and trafficking plays towards achievement of the UN SDGs.

“As a pioneer and leader of the global movement to end child slavery and to protect the rights of children to quality education, Mr. Satyarthi is uniquely placed to promote the SDGs, thus bringing them to the forefront of global attention,” UN Secretary General Antonio Guterres said.  “I applaud Mr. Satyarthi’s unwavering commitment to give voice to children around the world.  It is imperative that we come together, collaborate, build partnerships, and support one another in accelerating global action towards the SDGs,” he added.

“On behalf of the children of the world, I am honoured to accept this appointment,” Kailash Satyarthi said in acceptance of the appointment. “In the four years prior to the pandemic, 10,000 additional children between the ages of 5 and 11 became child labourers every day.  This increase took place during the first four years of the UN SDGs and is an unjustifiable development that is an early warning to the potential failure of the 2030 Agenda. The children who are in child labour are not in school, have limited or no access to healthcare and water and sanitation, remain in a cycle of abject poverty and face intergenerational racial and social discrimination,” he added.

“With 160 million children in child labour globally, and millions more vulnerable due to the pandemic, this appointment is an acknowledgement of the current crisis we are facing and its far-reaching implications on the overall 2030 Agenda. We have the knowledge. We have the resources. It is the political will that is required to ensure all children have the financial resources, policies and social protection required to end exploitation of children everywhere. Global development can be inclusive and sustainable only if the present and future generations are free, safe, healthy and educated,” the Nobel Laureate observed.

The UN Secretary General’s SDG Advocates are strong public figures who can use their voices and platforms to bring to life the vision of a better world and call for increased ambition and scalable action in the pursuit of achieving all the SGDs by 2030. 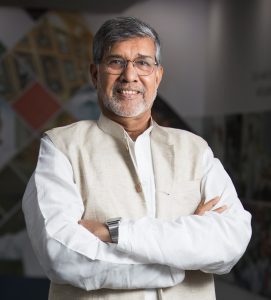 Kailash Satyarthi has been a tireless advocate of children’s rights globally, for more than four decades.

Through his organisation Bachpan Bachao Andolan, he has directly rescued more than 100,000 children from child labour, slavery, trafficking and other forms of exploitation. The Global March Against Child Labour, which he led, galvanized support in 103 countries resulting in the adoption of ILO Convention 182 on the Worst Forms of Child Labour, which in 2020, it became the only universally ratified convention in ILO’s history.

In 2014, he was awarded the Nobel Peace Prize for his lifetime of struggle against the exploitation of children and young people and for the right of all children to education. He is leading the global Fair Share to End Child Labour Campaign along with Kailash Satyarthi Children’s Foundation to address inequality, injustice and discrimination that lie at the core of child labour.

He has dedicated his life to realizing his vision of ending violence against children and building a world where all every child is free to be a child.