With KSCF’s Intervention, Kundi Village in Jharkhand Witnesses Development After Years of Struggle

Kundi is one of the most impoverished villages in the mica mining areas in Jharkhand. Before KSCF’s intervention, the village was found to be lacking all basic amenities, its people did not have access to government welfare schemes and its children worked in mica collection rather than attending schools.

Given the dire circumstances of Kundi village, in April 2020, it was formally adopted as a Bal Mitra Gram (BMG). Upon the interaction with the villagers, it was found that the village’s local primary school was only half-constructed since 2012 and had 74 children enrolled as per government record.

However, according to the villagers, children never attended the school as there was no teacher and no provision for the mid-day meal, study materials, and other facilities. Besides this, prolonged negligence and corruption from the government agencies’ side left the partially constructed school damaged for a long time. The nearby school which is 7 to 8 kilometres far from the village, was too far a distance to travel for small children. Hence, they chose to collect mica scraps and earn a living too. The BMG team was also informed that dozens of children from the village were trafficked to Gujarat and Kolkata for child labour in the past.

Taking cognizance of this violation of children’s right to education, the BMG team wrote an application to the National Commission for Protection of the Child Rights (NCPCR) and used social media to highlight the situation by tagging the letter to NCPCR’s social media page. The team kept following up with the NCPCR offices for swift action on their application.

In the last week of January 2021, NCPCR issued a direction to the district administration to submit a status report on the schools’ condition. The Administration was further asked to file its response within twenty days of the direction.

The result of this was swift action from the side of the Block Education Officer, for the school teachers to provide immediate COVID-19 relief assistance to the children on behalf of the Government. The teachers were also directed to distribute school uniforms and study materials to the children. Even though the school construction work is still pending, the Block Education Officer has assured the use of funds available with the School Management Committee for the construction work.

15 community members were also linked with a pension scheme and 19 people received the Below Poverty Line Card for subsidized ration supply from the government.

Ration for 15 days to the families of the persons deceased from Malaria and Diahorrea was also facilitated by the BMG team. The wife of the deceased was linked with the widow pension, housing scheme, other security schemes and also arranged for regular supply of ration from the administration.

This was an overwhelming moment for the community members, as their voices received a response from the decision-makers. 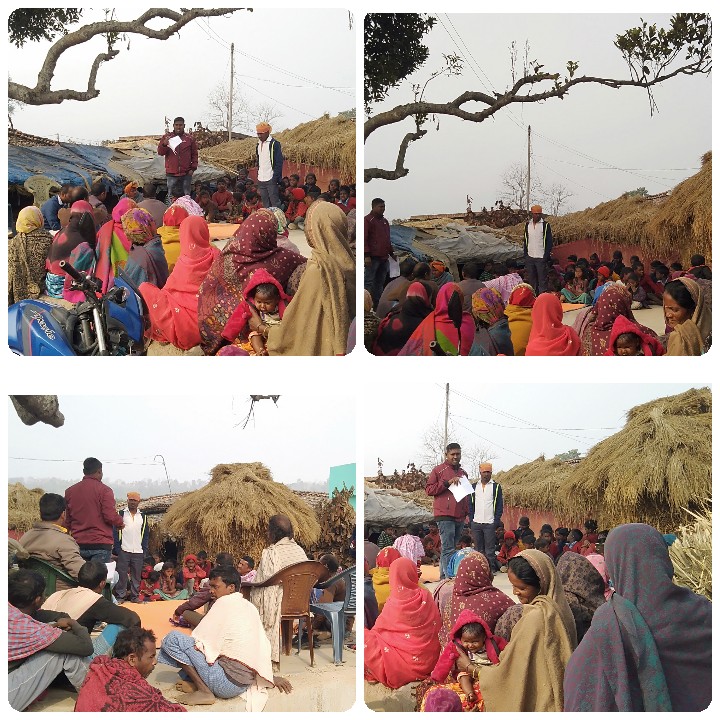 Given that Kundi village was not on the radar of infrastructure development, it also lacked a proper road that connected it to the rest of the nearby areas. BMG team, therefore, facilitated the construction of a 7 kilometre PCC road to connect the village with the main road and a 400 feet road within the village.

During the intervention, the BMG team also found the village to have a scarcity of safe drinking. BMG team, therefore, worked with Gram Panchayat and Public Health Department, and it resulted in the installation of three handpumps in the village which benefitted 450 community people.

BMG team fights Malaria and Diarrhoea in the village

Malaria and diarrhoea were found to be common diseases in the village. Lack of access to medical care for the people led to many fatalities especially women and children in the village. The recent outbreak of diarrhoea in July 2021 was one of such medical emergencies in the village. Within 25 days three community people including two children passed away as they did not receive treatment on time. COVID-19 cases and lockdown restrictions further aggravated the situation and delayed the necessary help on time.

To ensure the villagers are protected from the disease, the team organised health camps to spread awareness on malaria and facilitated health check-ups for the villagers. The team also distributed 98 mosquito kits. Indoor Residual Spraying and DDT was also carried out in the village for the protection of the people.