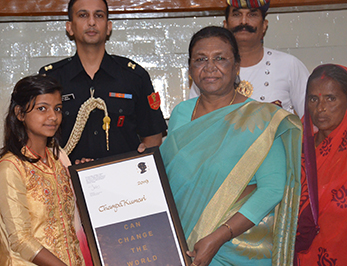 Champa Kumari was 12 years old when she was rescued from a mica mine in Giridih district of Jharkhand by our sister organisation, Bachpan Bachao Andolan (BBA). A resident of Jamdar village, she had always dreamt of going to school, but her father was against it. Her brothers, however, saw the spark in her eyes whenever she spoke about school and stood up for her. With Kailash Satyarthi Children’s Foundation’s help, Champa was soon enrolled in school.

Her school opened her eyes to the world and to new experiences. She soon started participating in the meetings held by the Bal Mitra Gram™ of her village where children her age discussed issues that affected them. Child marriage was rampant in her village and the very fact that girls had to give up on education and forced into marriage troubled her from within. She resolved to put an end to this.

She began with campaigns and rallies and helped stop two child marriages. Over the years, she emerged as a changemaker in and through her work, she reached over 9000 people. In 2017 year, she was elected the Vice President of National Level Bal Panchayat, where she presented the Children’s Charter of Demands along with co-members to the incumbent Minister of state for Labour and Employment Santosh Gangwar.

She also presented Children’s Manifesto to the British High Commissioner and Parliamentarians besides sharing the stage with the then Chief Minister of Jharkhand Raghubar Das and Nobel Peace Laureate Kailash Satyarthi for the cause of making mica supply chain child labour free in Giridih district. Champa’s perseverance has had a cascading effect on her community and has helped build a brighter future for young girls across the region.

In April 2019, Champa Kumari was awarded the prestigious Diana Award for being a crusader against violence and exploitation of children and was felicitated by Jharkhand Governor.