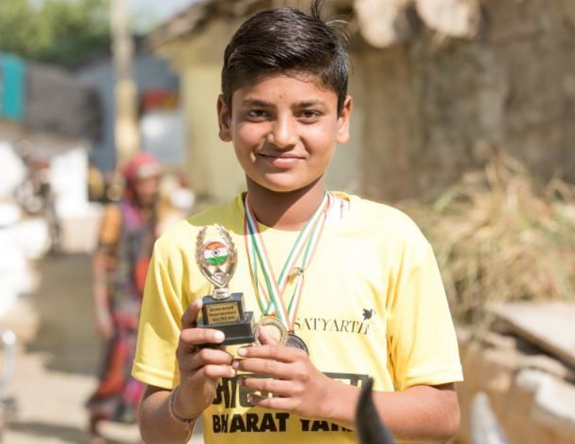 5 CFVs namely Shankar Garh, Lamanya, Badhar, Sahwa and Bhilay of Ganj Basoda had 5 illegal liquor shops in total. The story dates back to 2017, when 14-year-old Surjeet Lodhi from Sahwa CFV faced with incidents of daily abuse and violence inflicted by his alcoholic father. His father would spend all his income on alcohol thus affecting the socio-economic status of his family. Surjeet was emotionally and physically abused by his father which led to his drop out from school. The Kailash Satyarthi Children’s Foundation (KSCF) activists were informed about the situation that Surjeet and his family is facing and they went to counsel Surjeet’s father. But unfortunately Surjeet’s father was not welcoming enough and refused to discuss any ‘familial’ matter with the activists. Frustrated with his violence and negligence, Surjeet fasted until his father pledged to stop consuming alcohol. Initially his father thought this as a “childish act” but when he saw Surjeet’s persistence towards the issue he realised and pledged to stop consuming alcohol. Soon this incident reached every corner and street of the BMG, and the community members especially children and women came forward in support of the cause.

Following this incident Surjeet led various anti-alcohol campaigns in his and the nearby CFVs. It encouraged participation of hundreds of community members including children and women. Throughout one year applications were written to the Village Council and follow up was done by the Children’s Council. The applications were regarding shutting down of 5 liquor shops and declaring the Lehdera Panchayat alcohol consumption free. The children and women of Bhilay and Sahwa realised that the money that is spent on alcohol consumption by the male members of the community could be used for educating the children and maintaining household. Soon all the women of the two CFVs pledged to support the Children’s Council in putting an end to the sale and consumption of liquor in their village/s. Women representatives from both the CFVs visited the Sub Divisional Magistrate (SDM) and lodged a complaint about the illegal liquor shops in their village. The SDM promised to support the women group and wrote a letter to the Village Head. After 2 years of continuous follow up and rigorous work the 5 liquor shops in both the CFVs were shut down in the 2019.

Surjeet now leads the anti-alcohol campaign in the CFVs of Ganj Basoda along with the support of Bal Panchayat members and women’s group. The two people who were running illegal liquor shops were penalised and the members of Children’s Council of the other CFVs has pledged to make their villages free of illegal alcohol sale and consumption. A CFV focuses not only on the development of children but also in the holistic development of safe and friendly village. Children’s participation in working towards the wellbeing of the community led to this transformation. Along with the initiative of children it is extremely crucial that the community also understands the urgency of the issue identified. A CFV empowers the community enough to realise about the issues affecting them ensuring their participation in solving the issue.