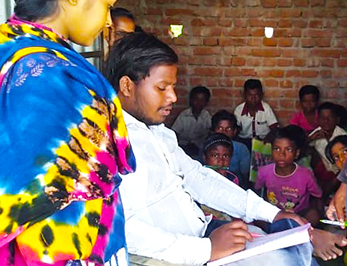 Crawling through the hazardous tunnels of mica mines in Jharkhand, Neeraj risked his life every single day to collect mica scrap which earned him a paltry sum of Rs 5 per kilogram. Risk notwithstanding, there was virtually no choice for Neeraj. The acute financial crunch his family was going through left his parents with little option but to send him out to the hell holes every single day to eke out a living.

Thanks to the timely intervention of our activists working tirelessly to rescue children from working in these death traps, Neeraj was rescued in 2011. Neeraj wasn’t alone. There were other children too in Duliakaram village of Jharkhand’s Giridih district who were forced into working in the mica mines. Realising the gravity of the problem in hand, Kailash Satyarthi Children’s Foundation initiated its flagship Bal Mitra Gram™ (BMG ™) programme to bring about a change in the village.

Along with other children, Neeraj was enrolled in the local primary school. The young minds thrived in this new environment where they understood the importance of education. Neeraj vowed to stop and prevent other children from facing the same fate he did.

Influenced by the work and efforts of our founder, Nobel Peace Laureate Kailash Satyarthi, Neeraj established ‘Kailash Satyarthi Public School’ in his village, which acted as a bridge school aimed at getting children who were forced to drop out of school get reintegrated in traditional schools post intensive tutoring. At present, the school works with 150 children.

Through Neeraj’s constant pursuit in changing mindsets and the support of the local community, Duliakaram was declared a child friendly village, with no reported cases of exploitation and abuse of children. Simultaneously is his pursuing his Bachelors degree from Bachelors of Arts from IGNOU Open University.

Presently, the president of Yuva Mandal or the local youth group, Neeraj is not just a role model for children in his village but also a support system for the entire community. From getting people linked to government schemes like old age and widow pension, to ensuring installation of hand pumps and facilitating electricity and LPG supply for villagers; Neeraj ensures that his community receives government entitlements on time.

Recognising his selfless work towards the upliftment of his village and the local community, Neeraj was conferred with the United Kingdom’s prestigious Diana Award on July 1, 2020.