Bal Panchayat advocating their way to change the quality of education 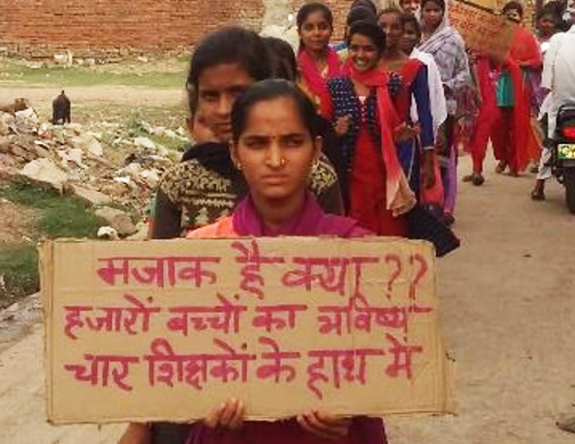 Education is the fundamental right of every child, as guaranteed by the Indian Constitution and a CFV facilitates this right through empowerment, building capacity of community members (children, women and young people) to use their voice to demand change. The Children’s Council of Pihra CFV of Giridih district in Jharkhand is an example of an empowered community as it advocated for the appointment of 10 permanent teachers in their Senior Secondary School.

In December 2017, an issue was raised by the Children’s Council of Pihra CFV that the senior secondary school (9th to 12th standard) of their village only had 1 teacher for 910 students. The unavailability of teachers in government schools in the remote villages of India is a common phenomenon because of the lack of qualified teachers, the government’s negligence towards the needs of children and the weak implementation of the Right to Education (RTE) Act, 2009. This was a major concern because there was no other senior secondary school available in the vicinity of 20kms which resulted in the access to and quality of education being compromised. Travelling for 20kms for higher education is challenging in this part of the country because of harsh terrain and lack of public transportation. Most of these children come from marginalized families and hence the option of private vehicles is equally unattainable. The Children’s Council raised the issue with the KSCF Community Social Worker (CSW) and after consulting with the CSW, the Children’s Council decided to take the issue to the District Magistrate’s office.

A meeting with the Deputy District Magistrate resulted in rapid action. The district administration wrote a letter to the Education Department of Jharkhand and directions were given for the appointment of 4 teachers in the school within one week. By January 2018, 4 teachers were appointed in the senior secondary school of Pihra. After constant follow up by various stakeholder groups in the village — youth group, women’s group and the Children’s Council, within a year (by February 2019), a total of 10 teachers have been appointed to the same school. Each teacher was appointed according to their skill and capacity level and the school is now suitably functional.

This action was initiated by a group of children who are between 10-14 years old and the result is fascinatingly impactful. The Children’s Council’s President Nisha Kumari expressed that “In a Bal Panchayat we have learnt to prioritize our needs and to work towards it. I am happy that we have a properly functioning school today and I, along with my fellow Panchayat members, have pledged to work and fight in making our village child rights exploitation free.”

This success story shows the power of encouraging children and young people to identify their concerns and providing them a platform from which to make change. Quoting Nobel Peace Prize Laureate Mr. Kailash Satyarthi, “Children are not the Leaders of Tomorrow but the Leaders of Today” This story has showcased an example of children acting as the leaders of their community.  CFVs inculcate leadership qualities in children by making them the flag bearers of their own concerns and issues which results in bringing a sense of independence, responsibility and belongingness for and within their community.