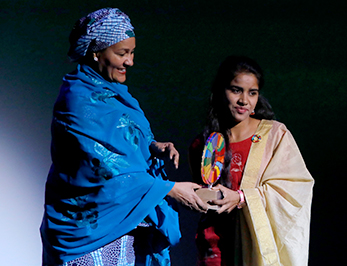 Payal was just 11 years old when she took a decisive step to fight against her family members who were forcing her to discontinue schooling and get married instead. She was a part of KSCF’s Bal Mitra Gram™ which encouraged children to take democratic action to bring about positive change in their lives and in the lives of the entire community. As the second Bal Pradhan (Child President/Chief), she realized the need to set a positive example for other children in her village, Hinsla.

It was a long and arduous journey but her persistence paid off. Her family finally called off her marriage and she could continue her education.

Her happiness was short lived as she increasingly realized that other girls in Hinsla were not as fortunate. She could not reconcile to the fact that her friends had to give up on their childhood. Inspired by the change she could bring about in her own family, she decided to mobilize other children to end the age old tradition of child marriage in her village.

‘Ghunghat Pratha’ or the regressive practice of women in Hinsla covering their faces with veil was something the children were vehemently opposed to.

Along with other children of the village, she amplified her fight against child marriage and ‘Ghunghat Pratha’. It took a year for change to slowly come about. Women were encouraged to speak up and voice their opinions.

In 2013, Payal was chosen as the jury member for the ‘World’s Children’s Prize’ for her work in Hinsla. She had realized her dream of a child marriage and ‘Ghunghat Pratha’ free Hinsla. She travelled to Sweden where she had the opportunity to meet other achievers like herself and got exposed to an environment that benefited her in many ways to continue on the path she had chosen for herself.

Payal was also awarded the ‘Sawdhan India Samman’ instituted by Life Ok channel to award real life heroes who have helped create a safer society by fighting crime in 2016 and ‘Young Achiever Award’ by global sports and fitness brand Reebok in 2017.

On September 25, 2019, Payal was awarded the ‘Goalkeepers Global Goals Changemaker Award’ by the Bill and Melinda Gates Foundation when she was just 17. As a Bal Pradhan, Payal has worked tirelessly to empower children and women of her village. She has carried out rallies and protests to engage various women’s groups and youth forums of her village.

As a child rights advocate, she works tirelessly to unite children to come together and raise their collective voices against all forms of injustice.