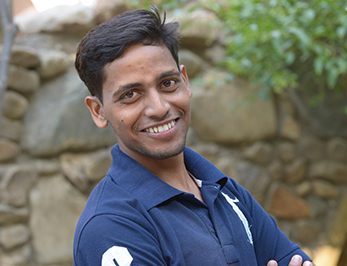 As a child he also wanted to play and feel loved. But life played a cruel joke on him. For little Rajesh, repeated abuse and exploitation had robbed him of his childhood. Till he was rescued from a brick kiln in Rajasthan when he was just 8-year-old in 2007 and taken to Bal Ashram, a long term rehabilitation home established by Nobel Peace Laureate Kailash Satyarthi.

Scarred by repeated abuse, it took some time for Rajesh to have faith in adults again. He opened up at Bal Ashram and informed that he hailed from Akbarpur village in Bharatpur. His family was economically weak and was forced to send him to work in a brick kiln for a few hundred rupees. He missed his parents but did not want to go back home for fear of being sent back to the brick kiln again.

At Bal Ashram, Rajesh was enrolled in non-formal education. He started attending classes from 5th standard. Since then there has been no looking back. In 2015, he secured 81 per cent in his 10th standard exam and was rewarded by the then Rajasthan Chief Minister for his academic achievement. In 2017, he passed his 12th standard board examinations securing 82 per cent.

Following his brilliant academic performance, Rajesh was enrolled under KSCF’s ‘Freedom Fellows Education Fund’ through which he was supported for completing Bachelor of Science (Physical science with Electronics) degree from Rajdhani College, University of Delhi. Determined to rise and shine, he wants to pursue higher studies going forward.